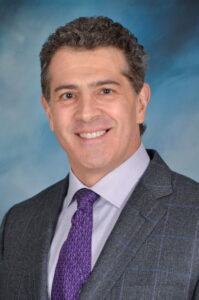 Dr. Eugene Antenucci has devoted hundreds of hours to learning the most advanced techniques in dentistry in order to provide his patients with the best dental care available. In the process, he has created one of the most well respected dental practices not only in Long Island but throughout the United States.

Assistant Clinical Professor at the School of Dental Medicine at Stony Brook University from 1995 through 2002 in the Department of General Dentistry. He is an Attending Dentist at Montefiore Hospital and Medical Center and currently serves as a Clinical Associate after attending the two-year Continuum in Implant Surgical Training at the New York University College of Dentistry.

Dr. Antenucci began his dental career as a United States Air Force Dentist and Captain. When He returned to New York in 1987 his private practice developed and grew into a state of the art dental facility in Huntington, NY, which was distinguished as “Dental Practice of the Month” by Dental Economics in May 2003, and “Business of the Year” by the Huntington Chamber of Commerce. Dr. Antenucci has now brought his expertise to Bayshore Long Island, where he has created a practice which provides the most advanced technology and skills available in dentistry today.

Dr. Antenucci is a recognized pioneer in CAD CAM dentistry, and has conducted training seminars throughout the States. He has worked with the technology since 1996, and is a National Spokesperson for Planmeca Corporation, as well as a Key Opinion Leader for Planmeca and Schein Corporations, and conducting training and seminars for dentists in the clinical utilization of CAD CAM and Cone Beam Imaging Technology, with an emphasis on implant treatment planning, implant surgery and implant restoration. In addition, Dr. Antenucci trains dentists in the use of lasers in the restorative dental practice.

Dr. Antenucci lectures internationally, conducting seminars in the clinical utilization of advanced technology in dentistry, as well as seminars in cosmetic dentistry, practice management, Planmeca FIT CAD CAM, 3D Imaging and Laser training. Dr. Antenucci has served on the Board of Benefactors of the Guide Dog Foundation and America’s Vet Dogs. He is fluent in Italian. His wife, Karina Gentinetta, is a renowned designer and artist, based in New Orleans. Dr. Antenucci practices on Long Island in Bayshore working a condensed, busy and productive week, and commutes weekly to and from his home in New Orleans Louisiana where he has uninterrupted time to write, prepare lectures, and most importantly, enjoy life with Karina and his family.